On September 17, 2020, television filming of the “Formula of Success” program took place on the “Saryarqa” channel within the framework of the library project of the same name, included in the Republican Register of events of the “Rukhani Zhangyru” Program. The program aired on September 25.

The goalkeeper of the youth national team of Kazakhstan, the hockey team “Saryarka” Demid Eremeev and the guys from the school №63, gymnasiums №38 and №93 (18 people) met at the dialogue platform. The young player became the star of the team’s opening match at the World Championship in Canada. In February 2018, Demid was named Goalkeeper of the Month for a good game.

The youth in the studio were interested in Demid’s successes in sports, his childhood, school years, dreams, personal qualities, as well as plans for the future. The long-awaited guest of the program, the favorite of the Karaganda hockey fans, shared his impressions of the last match, wished the guys to be purposeful, not to be afraid of anything and go to their goal.

According to the terms of the benefit show, the Guest identified the most interesting question. The best question for Demid was the question of Yakunin Alexander, 11th “B”  grade pupil  of gymnasium №38, the hockey player presented the participant of the benefit show with a memorable gift.

At the end, the organizers of the project presented  a statuette “Formula of Success” a symbol of success and recognition, as well as Abai Kunanbaev’s book “Words of Edification” and a gift edition “Miracles of the flora of Kazakhstan”. 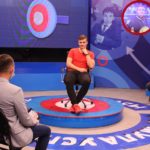 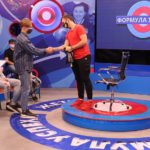 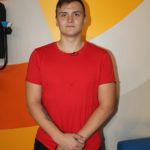