On September 27, 2019, the television shot of the Formula for Success program took place on the Saryarqa channel as part of the library project of the same name included in the Republican Register of Events of the Rukhani Zhangyru Program.

On the dialogue platform, the young world champion in sports acrobatics Nikita Amoskin and the guys from the specialized school-lyceum-boarding school of information technologies, the school of free development “Alter”, secondary school 63, 23, more than 60 people met.

The master of sports of international class, the gold medalist of the world championship among youth in sports acrobatics in the category of mixed pairs, a modest interlocutor told the children about his sports career, family, and hobbies.

The hero of the program lives in Novovolinsky, is currently a student of the Faculty of Physical Culture and Sports of the E. Buketov Karaganda State University and daily comes to Karaganda to study and train.

The Amoskins family is a sports family, parents and brother are involved in amateur sports. At 9 years old, Nikita’s grandfather, USSR master of sports in Greco-Roman wrestling, Petr Grigorievich Aschepkov, brought his grandson to the Greco-Roman wrestling section, later Nikita met acrobatics. When he was faced with the choice of which sport is dominant, acrobatics definitely won. According to the Hero of the program, acrobatics is the basis of all sports.

Today, a young athlete trains daily for three to four hours after class at the university.

To the question “What is your partner Anastasia Dolganiuk?” The Guest said: “We have been with Anastasia for almost 9 years. We have been training together since childhood, and in the end we have achieved such great results. Nastya is very hardworking and purposeful, working more than me. ” In October, a new project is coming up, the Asian Championship will be held in Tashkent, and the guys need to train a lot, work out the program in order to take their rightful place.

Nikita has no time for hobbies and hobbies due to a busy schedule, but in the evenings he eagerly meets friends, walks around the city, and communicates on social networks.

In the future, Nikita Amoskin sees herself as a trainer in sports acrobatics: “I will teach children how our trainers taught us. And if there is an opportunity, I’ll build a sports school with modern equipment and inventory. ” The young athlete dreams that sports acrobatics will become an Olympic sport where Kazakhstanis could show their results.

The dialogue participants were interested in the question of how to deal with their fears of competitions, to which the Hero of the program replied: “Do not think about the competitive moment, about the audience in the hall, the jury, you just need to go out and do what you can.” Even Nikita Amoskin gave advice to the guys: “Never stop there. Only go forward, set goals and achieve great results. ”

At a meeting with children, Nikita not only told the story of his life, but also aroused the desire of the children to play sports or simply strive for the intended goal.
According to the condition of the benefit show, the Guest selects the most favorite question and gives a gift from himself to the person who asked it. A gift from Nikita was a spinner magnet, which was received by a student of grade 11 “B” of secondary school No. 63 Balzhumanova Aigerim.

In turn, the project organizers presented N. Amoskin with the “Formula for Success” figurine – a symbol of success and recognition, as well as Abay Kunanbayev’s book “Words of Edification”. 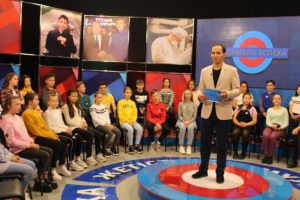 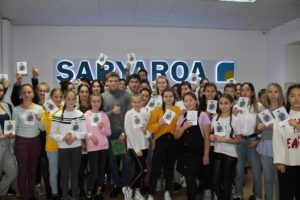 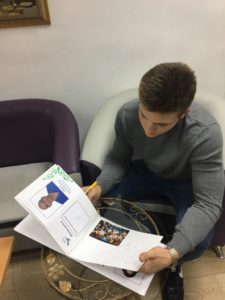