Fairy tales and not only …

In the cozy hall 2 Kunshuaq was very interesting and entertaining, and time flew by unnoticed.

The meeting of the young residents of our city with Karaganda children’s writer «We create for you, children!» was held on the third day of the Children’s Book Week.

A librarian by education and a writer by vocation – Elena Ponomarenko is known in the literary, library and publishing circles of near and far abroad. Her books have been translated and published in Kazakh, English, German, Czech, French, Slovak and other languages.

Elena Gennadievna is the Laureate of international competitions and republican awards, Resident of the National Agency for Press and Media “Russian Literary Center”, the author of more than 18 books: collections of stories «Mercy», «Childhood, scorched by war», «Professions», the story «Our Julie», «Collection of fairy tales», «Dragonfly and Dove»,

«Why do you snail a little house on your back?», « Sunny tales for little ones», «Tales of plants», «Tales of insects», «An old-timer», «Fairy Tales for Boys» and others.

In 2015, the recording studio of the city of Toronto (Canada), as part of the action «Blind Children», recorded on the audio carrier her collection «About Me and Everyone in the World».

The writer told the students about herself and her books, presented a new collection of «Fairy tales about flowers» to small lovers of literature.

The children got acquainted with the history of the book «Fairy Tales for the Littleest».

Children had the opportunity to ask the writer questions they were interested in. Live interesting dialogue ensued.

At the end of the meeting E. Ponomarenko gave out her autographs to everyone and gave her new book to the library.

The general photo for memory and the presentation of a letter of thanks to E. Ponomarenko completed the event on a positive note. 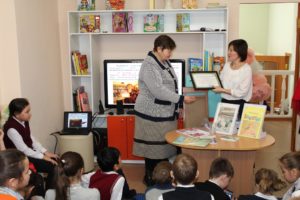 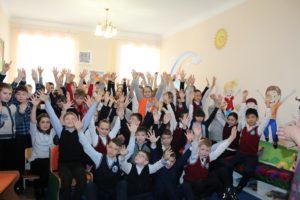