Memorial Day for “Heroic Victory at Stalingrad” is dedicated»

The Battle of Stalingrad ended 75 years ago on the 2nd of February 2, 1943, the German fascist troops were completely defeated (July 17, 1942-February 2, 1943). Almost a third of all Kazakhstan military formations took part in the offensive and defensive battles of the Stalingrad operation: divisions, divisions formed in Kazakhstan.

On the 2nd of February Memorial Day “Heroic Victory at Stalingrad is dedicated” was organized with the purpose of patriotic education of the younger generation, the popularization of Kazakh works about the Battle of Stalingrad in our library.

Students of grades 6-7 of Gymnasium № 92 were presented with a historical digression “Stalingrad is the key to the East”, through which the events of those years were revealed, historical maps of the defensive and offensive battles of the Soviet Army were presented, the names of all Kazakhstan heroes participating in the defense of Stalingrad. A video chronicle “The Chronicle of the Battle of Stalingrad”, “A Walk in the City of Volgograd”, a trailer for the film “Stalingrad” was included to the program of the Memorial Day
The discovery for readers was a bibliographic search, that in the battles near Stalingrad the son of the great Kazakh poet Zhambyl Zhabaev – Algadai Zhambylov also took part. The poems Zhambyl “Alynbas Kamal”, “Zhenis”, “Zhauga oq” were read dedicated to Stalingrad and his son. Also there were loud readings on the works of Halimuldina A.I. “The Starry Hour Manshuk”, Borisova S. “The Immortal Song of Manshuk.”

During the day, pupils of the children’s home “Kylynshak” visited the library. For them, a literary composition “Karaganda-Heroes of the Soviet Union-defenders of Stalingrad” was held, during which the children learned that our warriors-compatriots Nurken Abdirov, Martbek Mamraev, Andrey Dudarenko, Kazbek Nurzhanov participated in the Battle of Stalingrad. The children were invited to read memories of M. Mamrayev from Nikolai Pichugin’s book “Karaganda Essays”, Nikolai Titov’s poem “Feat”, Tamara Malovichko “Down in the Volga …” – to N. Abdirov. Readers were introduced to photographic materials – memorable memorials established in the city of Karaganda and Volgograd in honor of N. Abdirov, in Maykuduk in honor of M. Mamrayev, Honorable citizen of Karaganda. Under the sounds of the metronome, a minute of silence was announced in memory of the fallen heroes at Stalingrad.

With the purpose of forming the children’s interest in the history of the annals of the Battle of Stalingrad, the knowledge of the heroes who participated in the defense of Stalingrad for library users, reviews were conducted at the book exhibition «Stalingrad tubindegi erlik Zhenisine arnalady» , a book-tricker by E.Ilina’s book “The Fourth Height” was showed, the main character which is Gulya Koroleva, who died in the Battle of Stalingrad at the age of 20.

As part of the Memory Day, “Heroic Victory at Stalingrad is dedicated” at the same time, major events were held in all children’s libraries in Karaganda region, information and photo-report will be presented in the section “Professionals”. 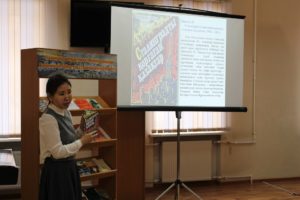 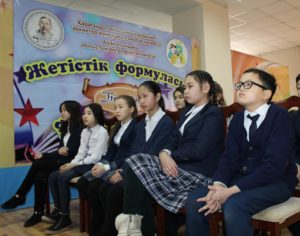 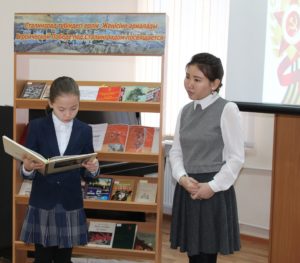