“My work is nourished by my native roots …”

On February 27, 2019, in the library together with the North Kazakhstan Regional Library for Children and Youth named after Gabit Musrepov, on the 85th anniversary of the birth of writer, an outstanding representative of Kazakh literature, Saken Nurmakuly Zhunusov, a TV link “My work is nourished by my native roots” took place.

Over half a century of his creative life, Saken Zhunusov made an invaluable contribution to the development of Kazakh literature. Dilogy “Akan Seri”, the novels “Zhapandagy zhalgyz ui”, “Zamanai men Amanay” were highly appreciated by both readers and literary critics. The plays “Azhar men azhal”, “Tutqyndar”, “Kyzym, sagan aitam”, “Jaraly gulder”, “Qos anar” and others were staged by the theaters of the Republic. The play “Oliara” in 1986 was awarded the State Prize of the Republic of Kazakhstan.

The 7th grade pupils of secondary school №6, students of the “Qulynshaq” orphanage, readers of the Karaganda library online met with their peers from the city of Petropavlovsk, exchanged opinions on the read works of S.Zhunusov, listened to the messages about the author’s work, took part in the quiz “What do we know about Saken? ”, we got acquainted with the writer’s book editions, which are available in the libraries participating in the space bridge. 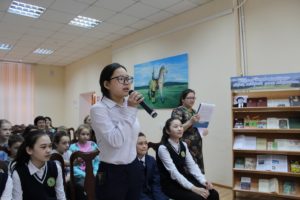