One region is one book: “A Boy in the Enemy Lines”

In order to increase interest in reading, development of spiritual and moral potential of adolescents through reading fiction, the Educational and Methodological Center for the Development of Education in the Karaganda Regional announced a regional action “One Region – One Book” among pupils of general education schools and specialized boarding schools. The motto of the action is: “I read, you read, the entire Karaganda region reads.”

On April 18, 2018, the library staff visited Boarding School 1 “Education-Innovation” and held discussions and discussions on the story of the writer, the hero of the Great Patriotic War, the famous partisan, the legendary and glorious son of the Kazakh people Kasym Kaisenov, “The Boy Behind the Enemy Lines.” The tale tells the life-long path of a ten-year-old Kazakh boy in the ranks of partisans on Ukrainian soil in the harsh years of the Great Patriotic War.

The discussion consisted of 5 stages: “The hero’s name in the memory of the people”, “Blitz-poll”, “Do you recognize me?”, “Dictation on the top five”, “Creative work”.

At the end of the event, the students wrote an essay-reflection on the book they read and got acquainted with the book exhibition “Zhazushy – Tarikhi Shezhire”. 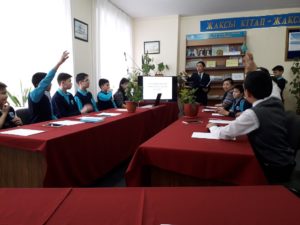 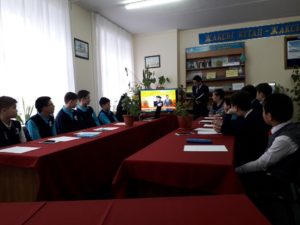