“The Latin alphabet: modernization begins with a letter”

On the 12th of April 12, 2018 at 14.00 o’clock , the information stand “Latin alphabet: modernization begins with a letter” was organized for young readers of the library.

The stand displays information on the history of Latin graphics, its use in the world community, upcoming events in the children’s library for the promotion of Latin graphics, theses about the transition of the Kazakh language to Latin.

The librarian told the readers about the importance of switching to the Latin alphabet, she provided readers with information about a new version of the Latin script. 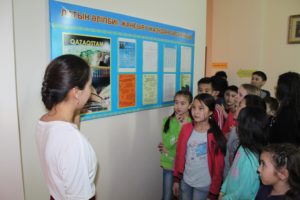