For many years Karaganda Regional Children’s Library named after Abai participates in the organization of summer holidays for children.During the summer school holidays it is the organizer and participant of various mass actions aimed at promoting the program “Summer. Children. Book “, a summer reading room and the popularization of children’s literature and children’s reading.

The official opening of the program will be held on June 13, the summer reading room will work for children, parents and guests of our city.

Reading books and magazines in the open air, meeting young city residents with novelties of children’s literature, participating in contests, quizzes of various content will be held every Wednesday from 11.00 to 14.00 p.m.

But the library accepts young users not only on Wednesdays, it works for them all days of the week except Saturday.

On June 5, the children of the camps of the school №48,  №64 and summer camp “Smiley” took part in the interactive game “Journey through the fairy tales”, where  together with Ivan from the fairy tale “Morozko,” were looking for Nastenka, having traveled from the hut of the Baba Yaga to the lake where Vodyanoi lives from the fairy tale “The Flying Ship”.

Along the way, Leshy suggested that the children define “Who is superfluous?” in the pictures from the fairy tales of the peoples of the world.

At Kikimora on a swamp players defined on a musical fragment to whom the voice of the fantastic character belongs.

In the “Cave of Koshchei” they searched for objects in the chest with gold, and only when the egg was found in which Kashchei’s death was hidden , the journey with

Gerda and the Reindeer continue playing, guessing the rebuses.

Only after passing through all the game stations , the children help Ivan to meet Nastenka.

At the end of the event, children enthusiastically read books and looked through magazines from the fund of the department of childcare of preschool and primary school age libraries. 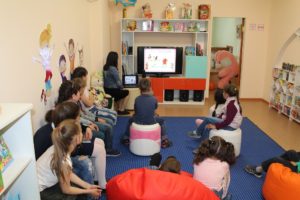 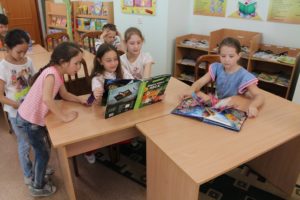