Since ancient times, the eastern people have celebrated Nauryz. It is a festival of the unity of nature and man. It is a holiday of the equinox.

On the 13th of March , on the eve of Nauryz Meiram, the Karaganda Regional Children’s Library named after Abai together with the Department of Culture, Archives and Documentation within the framework of the Nauryz-Caravan events held a literary-musical evening “Nauryz is my property, Nauryz is my holiday” for children and residents of the city. Participants of the event were children undergoing treatment in the sanatorium “Baiterek”. On the book exhibition “Welcome, Nauryz!” books about traditions and customs, national games of the Kazakh people were presented. The book exposition was supplemented with national clothes, objects of everyday life, ritual and applied art of the Kazakh people (belbeu, kamcha, tomaga, ayaq bau, biyalay, etc.).

During the event, the participants competed in the national games “Drag the Rope”, “Asyq”, “Qol kures”. The games provoked the children, and the game in the asyq shows the dexterity of the guys.

Librarians not only exhibited objects of life and ritual, but showed and told how and for what they were used. If the girls were interested in trying to work with the spindle, the boys were fascinated with the eagle hunting devices.

A special tone of the event was given by performances of students of the Tattimbet College, who performed cuies and folk songs. 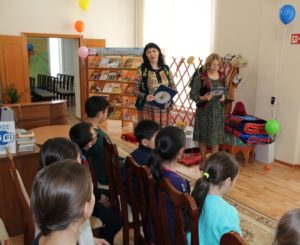 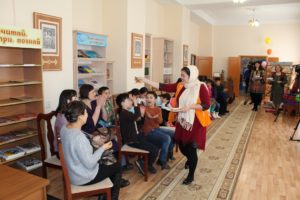 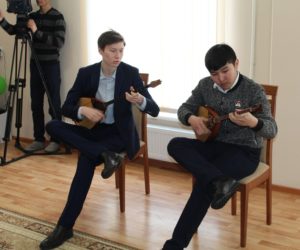 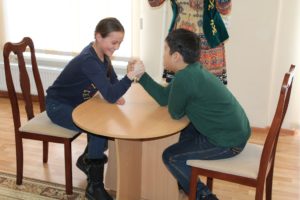