Tatiana Dubovskaya is a modern children's poet, the author of numerous poems for children. Poetess known not only in Kazakhstan, her poems printed and Russian media, which is appreciation of creativity T.Dubovskoy.
She was born poetess in the Tyumen region in the city of Ishim. In the 80 years I moved to Temirtau. He got a job as a kindergarten teacher. Love for children and their unique world fascinated and captivated the future author. Poetic gift opened unexpectedly. His first poems appeared and gathered in the notebooks, eventually developed into collections and books. The desire to bring their creativity to the youngest readers led to the publication of books.
Published a collection of poems "On the bright, the bad news about Love" in 2007. In 2006 - two children's books, "our kids" - book "Poems for Children" in 2008. The verses go on the pages of newspapers "Metallurg", "Kazakhstan MMK", "Mirror", "New Temirtau" (Temirtau), "Industrial Karaganda" (Karaganda), the magazine "Niva" (Astana), the almanac " Children's literature "(Moscow), the almanac" The poet of the year - 2011 "(Moscow), the almanac" Illuminated takeoff Saryarka "(Karaganda)," Pearl poetry of Kazakhstan "(the third book), an almanac of" Heritage "(Mr. .Moskva), dedicated to the 400th anniversary of the Romanov dynasty.
Tatiana is a frequent visitor to libraries, schools, lyceums, gymnasiums of the city, a participant of city and republican poetry festivals. Funny poems of the author, the ability to apply them in a mischievous, playful style, in a relaxed, warm and sincere communion captivate listeners and readers to the magical world of childhood. Readers fascinated credibility and sincerity of intonation of children's poems, such as "Friends", "Dasha and porridge", "task", "I help my mother", "rasteryasha" and others.
Tatiana Dubovskaya is a member of the literary association "Magnit" (Temirtau), a member of the Karaganda branch of the Writers 'Union of Kazakhstan, member of the Russian Writers' Union, the finalist of the "Heritage" award, the winner of the contest "My native home", a nominee of the Russian National Literary Prize "The Poet of the year - 2011, "which established the Russian literary club and publishing house" Author's book "with the aim of finding new talented authors who can contribute to modern literature.
The author has the certificates of gratitude and certificates for their contribution to the development of culture of the city, for the upbringing of the younger generation of morality, spirituality, love for literature. 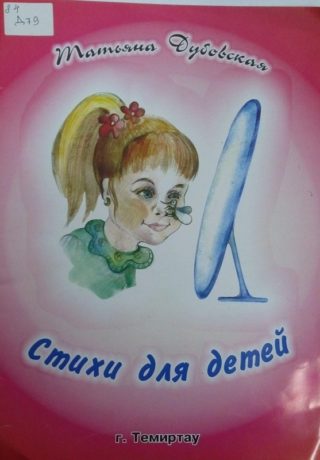 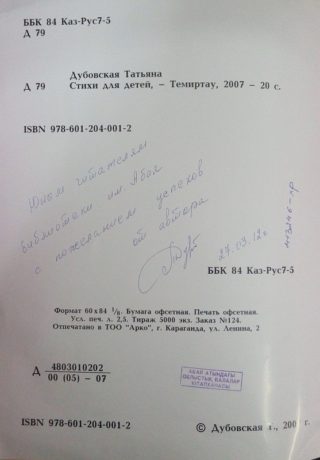