On October 18, 2019, the television recording of the Formula for Success program took place on the Saryarqa channel as part of the library project of the same name included in the Republican Register of Events of the Ruhani Zhangyru Program.

Ali Zhavanshirovich was born in a military family in the city of Osinniki, Kemerovo region, he lived in Siberia for 20 years. The future inventor was brought up strictly, but in childhood and adolescence Ali could still be a hooligan; more than once he had to fight with himself, change his character.

The future scientist began his career at the Karaganda foundry after graduating from the Tashtagol Mining College. In 1999, he graduated from KSTU with the qualification of “mining electrical engineer”.

The results of many years of scientific activity of A. Mehdiyev are reflected in more than 57 scientific works, the professor is the author of 5 video lectures and 19 electronic educational tools.

Ali Zhavanshirovich told the children that he was working on the development and implementation of high technology in career development transport, participating in research on the energy conservation program, actively working with young people, studying and introducing fiber-optic sensors, the unique design of which would reliably protect the country’s many kilometers .

From the conversation with the guest of honor of the program, the children learned that Ali Zhavanshirovich had been interested in electricity since childhood, he liked to assemble radios. Interest in energy pushed the scientist to create new engines. “Electric current has a great future,” says Ali Zhavanshirovich, “after 20-30 years, gasoline will go into oblivion. The scientist must decide the question of the future. The international exhibition EXPO proves that technology is changing, and energy saving today is an urgent issue among scientists around the world. ”

The hero of the benefit show advised the guys to choose their favorite business for the profession, to do what the soul lies to. And for success to come, you must always set goals, achieve them, set high standards and do not give up.

Ali Zhavanshirovich has been trying to live a decent life, has always been engaged in self-education, and believes that a good education is very important for the younger generation. “Science and education should be in the first place, because in the development of the state, technology is everything,” says the professor.

In his spare time, the scientist loves to listen to opera; he often visits the Astana Opera Theater in the capital.

To the question “What historical person would you like to talk with?” The guest of the program called the Russian writer and playwright Mikhail Bulgakov for the fact that his works make you think about many vital issues.

Ali Zhavanshirovich read many books, both scientific and fiction, he advised the children to read the dystopia of D. Orwell “1984” and the masterpiece of science fiction “Solaris” S. Lem.

According to the condition of the benefit show, the Guest selects the most favorite question and gives a gift from himself to the person who asked it. The keychain was received as a gift by a student of grade 9 “B” in secondary school 16, Shkadyuk Sofia, for a question about her favorite books, and student of grade 10 “B” in secondary school 38, Elizaveta Ashcheulova, received a USB flash drive for the question “How did you meet your wife?”

In turn, the project organizers handed A. Mehdiyev a statuette “Formula for Success” – a symbol of success and recognition, as well as Abay Kunanbayev’s book “Words of Edification”. 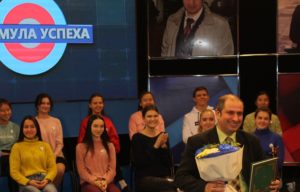 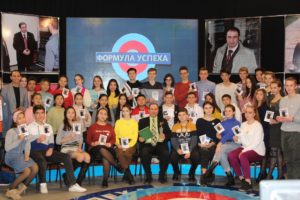