The poet was born on the 4th of March in 1942 in the Aktogay district of the Karaganda region in the village of. Kuanysh at the foot of the mountains of Kyzylsegyr. In 1964 he graduated from the Philological Faculty of Kazakh State University named after S. Kirov. Worked as a literary employee in the republican youth newspaper “Leninshil Zhas” since 1965 he headed the literary and dramatic edition of the Kazakh radio. Then he worked at the State Publishing House, the publishing house Mektep.

Zhenis Kashkinov began to write poems in school years. His first works were published in 1959 in the magazine “Pioneer” and the newspaper “Kazakhstan pioneer”, when he studied in the tenth grade. The first book of the poet “Evening Sun” was published in 1967.

He wrote sixteen poetic and prosaic books for adults and children. His poems were translated into Russian, Ukrainian, Uzbek, Moldovan, Georgian, Kyrgyz, Belarusian, Uighur and other languages.

Some of his works were included in textbooks and anthologies, many songs are composed on the words of many. On the verses “Astana Zhyry” composer T. Kyshkashbaev composed a song about Astana.

At the dawn of independence for his works the author chose great historical themes, told about the heroes of the Great Patriotic War through ballads (collected data for more than twenty years), dedicated poems to famous poets and writers of Kazakhstan.

The writer raised environmental issues in his works. Glorified a beautiful view of the lake Balkhash. He spoke with the problem of the disappearance of fish in Balkhash in many publications and radio. Zhenis Kashkinov translated many poets of the far and near abroad.

In his time, Kashkinov was a very famous freestyle wrestler and won the title of Master of Sports .

He is a member of the Union of Writers and Journalists of Kazakhstan, laureate of the Prizes of the Union of Journalists of the Republic of Kazakhstan. Honorary citizen of Aktogay district. For active work, Zh. Kashkinov was awarded many diplomas and a medal “For Labor Valor”. He is a laureate of several literary magazines and poetry competitions. 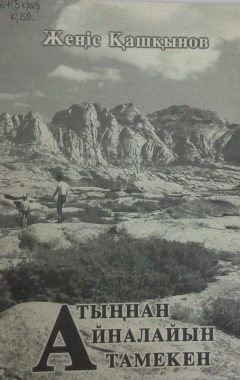 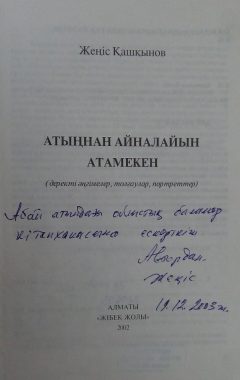 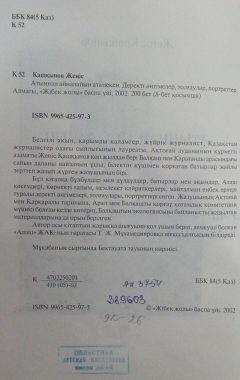