On the 20th of June , 2018 on the basis of the Central City Library named after S. Seifullin Zhezkazgan CLS an exit seminar “Kitaphanalyq olketanu – “Motherland” was held for the purposes of professional exchange of best practices on local lore activities of children libraries of the region.

Libraries of local lore as a factor in the promotion of the special project “Motherland” for 67 librarians of the Zhezkazgan, Ulytau, Satpayevsk CLS, Satpaev c. and school libraries.

Within the framework of the seminar 6 reports were heard, 1 workshop was held, one creative meeting was organized, devoted to various aspects of popularization of local lore knowledge. The program of the seminar included the following speeches: “The library is the center of local lore education of the younger generation: from the experience of the Zhezkazgan Centralized Library System”, “The main conceptual approaches to the implementation of the special project “Motherland”,” Social partnership for the promotion of local lore knowledge in the children’s and youth library “Local studies in the school library”,” The core of the regional literature of children’s literature”,”Local history work: search, innovations: from the experience of the Satpayev DYUB. ”

The libraries of the Zhezkazgan region also contribute to the formation of a stable base of historical knowledge about the history of the region, the city, the region of young readers. The interest of the seminar participants was caused by a workshop on popularization of the literature of the native land, on inculcation of interest in poetry. The head of model library-branch number 9 Zhezkazgan CLS A.T. Utebaeva and her colleagues shared practical experience: how to conduct in the walls of the library the local lore bibliophage “Samgatqan san qyrandy tugan olkem”, during which songs and excerpts from the works of local authors were heard.

The seminar was attended by K.B. Rysbekova-the head of the school library of secondary school 133, who provided information on how the base of local knowledge is being formed in the conditions of the school.

Within the framework of the seminar, a creative meeting was held with Ernur Seydakhmet – the author of the books “When I’ll be an adult”, “Tentek Dop”, “Kulshi qane Balaqay”, winner of the 3rd place in the Republican contest “Astana-Baiterek”, winner of the 3rd place in the nomination of poems “Еnbek shynyqtyrady “Republican competition” Balausa”. E. Seydakhmet spoke about the books which he read in his childhood, who instilled a love for reading, when he began to write poetry, how he combined work in the corporation “Kazakhmys” and poetry. In the funds of children’s libraries of the region there are his books, and the author also places his works on such sites as www.adebiportal.kz/kz and www.tattialma.kz The presentation of the disc “The collection of songs for children” was very interesting, the author of songs is Yernur Seydakhmet, the composer – Alibi Abdinurov. The young poet after presentation presented as a gift two discs with an autograph to the organizers of the seminar.

Librarians during the presentation of the book exhibition “Rukhani zhangyru” got acquainted with the novelties of books on the history, literature of the region, as well as books published under the auspices of the state program “Rukhani zhangyru”. The speakers focused on the publications of local authors. It is gratifying that 12 volumes published in the series “Ulytau library” were presented to our library.

At the end of the seminar G.O. Tugelbayeva, the head of the Zhezkazgan Centralized Library System and B.K.Utaeva, the head of the Karaganda Regional Children’s Library named after Abai summed up the results, noting that an exchange of professional ideas had taken place, which would stimulate the further activities of children’s libraries in the local lore direction within the framework of the special project “Motherland”.

Library specialists noted the high informativeness of the seminar and the practical importance of the knowledge gained, the need for such meetings to share experiences and improve professional competence (the Workshop Program). 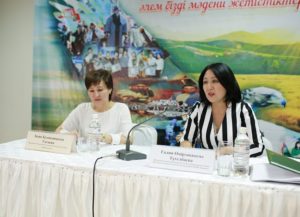 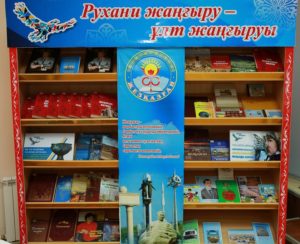 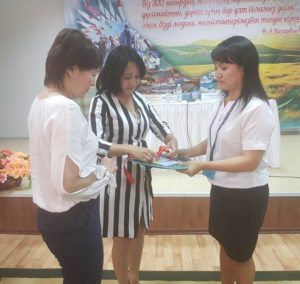