On July 5, a program was broadcast with the participation of businessman, founder and founder, as well as a member of the board of directors of NPO Defectoscopy, Upabekov Adil Esenovich.

The filming of the “Formula for Success” program on the Saryarqa channel continues as part of the library project of the same name with the participation of our readers and honored guests, our countrymen.

The guest of the program told the children that NPO Defectoscopy was founded in 2009 and occupies one of the leading places in the provision of non-destructive testing and technical diagnostics in the industrial, oil and gas, energy and mining areas. In 2017, she won the “Altyn Sapa” award in the nomination “The best enterprise providing services: a medium-sized business entity”.
Since childhood, Adil was quite enterprising, and later he had the opportunity to open his family business. The first steps were difficult, it was necessary to take risks, especially since in Kazakhstan this niche of activity was empty, everything had to be organized from scratch, using the experience of other countries. Now the company is working closely with the faculties of Karaganda State Technical University, looking for talented and interested youth, attracting to the development of new technological processes.

To the question “Is there a future for the profession of a flaw detector?” Adil Upabekov answered: “The profession has a very wide range of activities, this profession is important for large industrial organizations. Today competition has already appeared, it leads to development, it gives an opportunity to grow, to be stronger. Definitely, the profession has a future. ”

“In developed countries, flaw detection is rapidly progressing, artificial intelligence is being used, and high-quality analytics is being carried out. Despite the fact that Kazakhstan is a little behind and uses outdated methods, there is development, – said Adil Upubekov. “We are constantly conducting research projects of various kinds in order to develop our own method for non-destructive testing.” The demand for non-destructive testing in Kazakhstan is large. One of the major customers of NPO Defectoscopy LLP is KazMunayGas and other energy companies.

The guys were interested in the question of how to become a businessman and what personal qualities are needed for this. The hero of the program noted that, first of all, it is important to have a great desire to do his job, be able to take risks, be persistent in work, achieve goals and be open to cooperation. It is also important human qualities, such as: honesty and justice.

From the conversation, program participants learned that the Guest of Honor loves to learn, play basketball, and read motivational books. Adil Upabekov voiced his life credo: “Everything is possible in our world”, advised the children to smile more often and remembered the Chinese proverb “Who does not know how to smile, should not engage in trade”.

According to the condition of the benefit show, the Guest chooses the most favorite question and gives a gift from himself to the one who asked it. The most active interlocutors received motivational books as a gift from a guest.

In turn, the project organizers handed Adil a statuette “Formula of Success” – a symbol of success and recognition, as well as the book of Abai “Words of edification” by Abai. 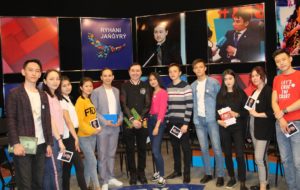 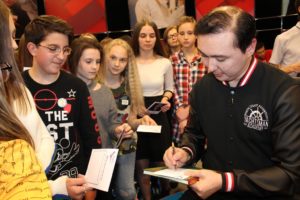 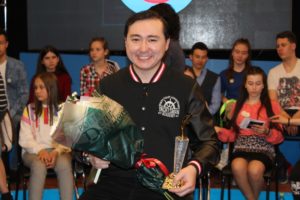 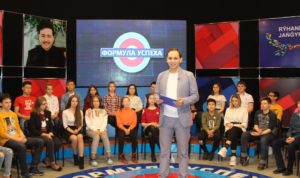