On the 28th of February, 2018, at 13.00 o’clock, a local study and research club “Zhadiger” was opened by Karaganda Regional Children’s library named after Abai for secondary and senior school students in the framework of the state program “Homeland”.

The task of the club is to develop the curiosity of the readers-children, to enthrall them with the process of cognition.

The priority directions of the club’s work will be: education of patriotism among young Karaganda people, which is expressed in love, pride and devotion to their city, its history and culture; acquaintance with the sights, storing memory of important historical events; instilling a sense of pride for their land, respect for fellow countrymen and traditions.

During the event, students of the 8th grade of the gymnasium number 93 were invited to make a retro tour with a media presentation “Saryarka Primary”, which was conducted by D. Zhusupov, a research associate of the local history museum of the Karaganda region, and also met with a fellow Karaganda native, a representative miner’s dynasty Hudz.

Dauren spoke about the discoveries on the territory of Central Kazakhstan during the Neolithic era, the era of iron and bronze, begazy-dandybaevsk culture, the parking of an ancient man in the city, the bronze pyramid Saryarka found near the river Taldy and much more. In the story were used ancient artifacts from the museum’s funds, presented at the exhibition.

Karaganda and its history are inextricably linked with the profession of a miner, not without reason it is called the “Mining Capital”.

Kazimir M. Gudz, the head of the dynasty who worked with his wife in the mine for more than 40 years, today his children and close relatives also continue mining work, the total experience of the Hudz dynasty for more than 200 years, these are only those who worked and still work at the mine “Kostenko”.

At a young age, namely at the age of 26, K.M. Gudz received his first sign “Miner’s Glory”, the sign of which was awarded to workers of the coal industry for impeccable work and long service, but this is not the last award in his working life. He is a man of an interesting fate who, at sixteen, chose among many other professions, the miner’s profession told the children about a meeting with the veterans of the mining industry of different years, the reasons that influenced the choice of the profession and much more.

Six participants of the event expressed their desire to become members of the regional research club “Zhadiger”.

The library would like to thank the Karaganda Regional History and Local Lore Museum for providing the attributes and artifacts from the museum funds, corresponding to the subject matter. 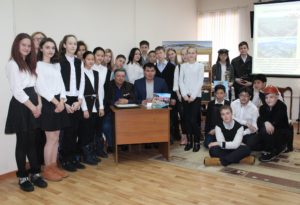 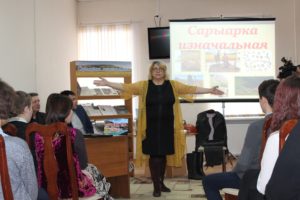 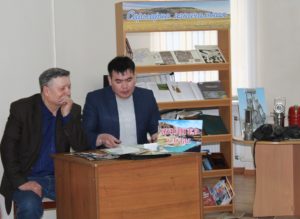 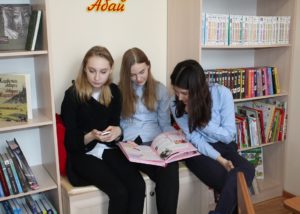