The television project “Formula for Success” is included in the national list of activities of the “Rukhani Zhangyru” program. On May 6, 2019, the filming of the program of the same name on Saryarqa TV channel took place, and the program was aired on June 7.

The deputy chairman of the administration of the Astana International Financial Center Administration JSC, the repeated winner of the World Physics Olympiads, the winner of the 100 New Persons of Kazakhstan project Ernur Rysmagambetov and the children of city schools and lyceums met at the dialogue platform.

“What is the success formula for Ernur?” – this was a conversation between the guys and the Hero of the program.

Since childhood, Ernur was a very inquisitive child, always striving to be the best, overcame the difficulties and decidedly bring everything to the end. At school, he was an Olympian in physics, participated in international competitions and for a long time was the most titled physicist in the country – one gold, one silver medal.

Over time, the Honorary Guest passion for physics has grown into a passion for finance. “Finance is also a system, it is very dynamic and rapidly developing,” explains his interest in finances Ernur Rysmagambetov. After studying for 3 years at the California University of Technology, at one of the strongest universities in the world, at the Faculty of Physics, he nevertheless opts for economics. As an economist, he worked as a financial analyst at Wilshire Associates in California.

Ernur Rysmagambetov told the children that the created Financial Center sets as one of its goals – helping young financiers to acquire new skills and information in a modern, developing economy.

“This is a great advantage of Kazakhstan, especially in the study of complex new tools. And we, as a Bureau, want to help professionals have “healthy brains.” A special place in our activity is promotion of investment literacy. To this end, we hold thematic events. ”

To the question “What needs to be developed additionally in order to be in demand tomorrow?” The guest answered: “Mobility of thinking. Many people now simply will not keep pace with the changes, so the ability to learn new technologies, constantly updated – will be the most important skill. ”

Many questions about the activities of the International Financial Center, childhood and adolescence, and life values were raised from the children. The dialogue turned out to be lively, interesting, informative. At the request of the participants in the dialogue platform, Ernur played the dombra, and later two guys received gifts from him for interesting questions.

In turn, the project organizers of the Department of Culture, Archives and Documentation of the Karaganda Region and the Karaganda Regional Children’s Library named after Abai thanked Ernur for meeting with the children and presented him with the statuette “Success Formula” – a symbol of success and recognition, as well as the book of Abai “Words of Edification”. 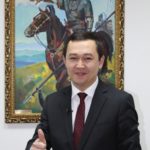 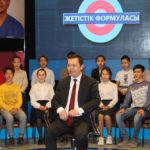 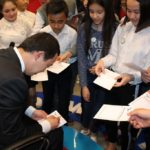