The best of the best

On the 16th of March , the Children’s Library Week named after Abai solemnly closed the Children’s Book Week – the holiday-congratulatory program “The Day of the Reader”.

The best and most active readers were awarded with memorable diplomas and gifts in 9 nominations in a solemn atmosphere.

Presentation of each nomination became memorable and solemn for young readers. After all, they were handed to invited guests. The young detective was nominated by the head of the department of educational work of the Karaganda Academy of the Ministry of the Interior of the Republic of Kazakhstan named after B. Beisenov, Davletbaev A., who in turn presented Lyudmila with a book, her favorite genre, which gave special significance.

Our regular guest, journalist Ayin Nesipbai presented the nomination “The Most Active Reader” Elizaveta Bondar, who read more than 260 books.

It is symbolic that the nomination “Library Friend” was awarded by the senior manager of the bookstore “The Book for You” – Vologin L., who in turn is an old partner of the library.

Joyful dance ensemble, young singer Darkhan Kasymbek, actors of the puppet theater “Buratino” with a theatrical performance “Kurochka Ryaba” created a joyful mood for the participants of the event. 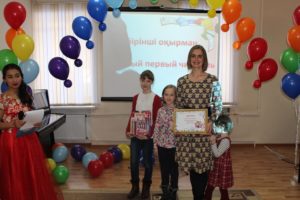 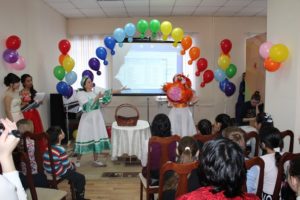