Mother tongue is an inexhaustible spring

In Kazakhstan there are more than 130 nations, and each language is a unique.Interest in the native language, the desire for perfect mastery of his written and oral forms always characterizes the cultural person. There is no such sphere of communication wherever a good command of the language and the ability to use this invaluable gift, bequeathed to us by our ancestors, were required.

On September 21, a literary game “Mother tongue is an inexhaustible spring” was held for pupils of the 5th class of the school № 58.

The event was interesting and exciting. First the children remembered the history of the “Day of Languages of the People of Kazakhstan”, learned that from 2018 it will be celebrated on September 5, the birthday of the famous Kazakh scientist, educator, political figure Ahmet Baitursynov.

Then all went on a journey to a distant and fascinating Country of Languages. In various fun literary competitions, students could not only listen, but also perfectly show their knowledge, to think logically, to show wit and resourcefulness.

Children were told the story of the song “Let there always be a sun!”, Which crossed the borders of one state, the children of the whole world sang. The refrain of this song became a symbol of the friendship of children of all countries. With the help of karaoke pupils performed it in three languages: Russian, Kazakh and English.

The game was a success! There were no winners and losers in it. The friendship won – and this is quite natural !!!
In conclusion, the review of the book exhibition “One hundred people – one hundred languages” was conducted. 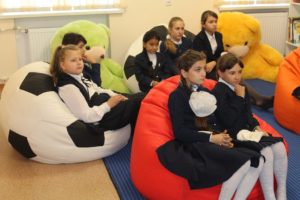 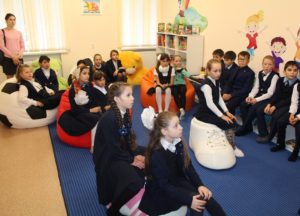 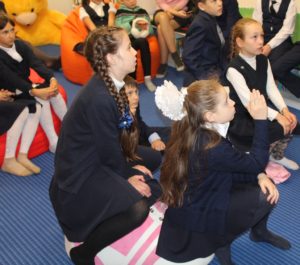